Have you ever been a bridesmaid?  Pippa Middleton was one. Julia Roberts played one, and so did Patrick Dempsey.  For centuries Bridesmaids have been relegated to a supporting role complete with puffy sleeves and dyed shoes… but those days are over. Yellow Tail wines announced today it is partnering with Universal Studios Home Entertainment and NBC Universal Digital Distribution to declare September 20, 2011 National Bridesmaid’s Day in celebration of the Blu-ray, DVD and On Demand release of Universal Pictures’ breakout comedy, BRIDESMAIDS.

National Bridesmaids Day is the day for every past, present and future bridesmaid to have their own day to shine. 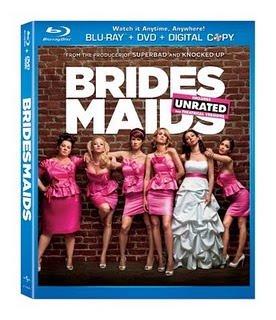 The first ever National Bridesmaids Day will be marked in NYC with a fun and surprise-filled celebration for bridesmaids, bloggers and media. Guests to the event are invited to bring old bridesmaids dresses which will be donated to The Glass Slipper Project, http://www.glassslipperproject.org, which distributes formal wear to girls in need during Prom season.

Bridesmaids can “Like” Yellow Tail on Facebook and be entered to win an all-expense-paid trip for two to Hollywood, California, where they can enjoy a “star-for-a-day” experience.  By forwarding the link to a friend, she can be entered for a second chance to win. A down-loadable party pack, perfect for watching the Bridesmaids on Blu-ray, DVD or Movies on demand is also available on Facebook, where exclusive, behind-the-scenes content may also be seen.

**Information provided by PR company.
Posted by CheekyMommaof2 at 6:41 AM