WHEN IT COMES TO COMEDY…
NO GAME NO FOWL
Comedic Icons Steve Martin, Jack Black and Owen Wilson Star in the Hilarious Outdoor Adventure Coming to Blu-ray and DVD January 31! 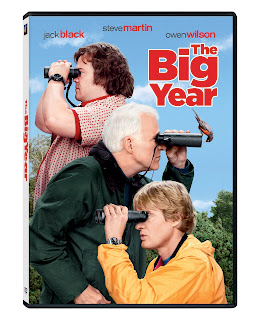 Posted by CheekyMommaof2 at 5:57 PM

I would like to win because it looks like a funny movie, and we enjoy movies with Jack Black

I'd like to win because it looks funny and I like all 3 of the main actors in it:)

I'd like to win because we love Steve Martin, and because it sounds really funny!

I am a big fan of Steve Martin and Jack Black :) I actually wanted to see this in theater's, but didn't come to my local theater unfortunetly. Would love to have the opportunity to see it :)

I need a good comedy...
tarter95 at hotmail dot com

I love all of the actors and think they are very funny. Laughing is good medicine.

I would love to win this movie because Steve Martin, Jack Black, and Owen Wilson all in one movie... You just know you're gonna be doubled over in laughter... =)

I love comedies and there's great actors in this movie

I would like to win it because I'm a big Owen Wilson and Steve Martin fan.

want to win: because I enjoy all 3 actors
xoxoxo

I love birding! Sounds boring but it actually exciting!

I LOVE Steve Martin, Jack Black and Owen Wilson!!! But put all three together I just have to have this movie. Thanks for giveaway.
ncjeepster@aol.com

I'd love to win this because I love Owen Wilson...and Jack Black's sense of humor!

I would like to win b/c this looks like a great movie to watch with my husband!