Throw a Superhero Party Worthy of THE AVENGERS!

MARVEL’S THE AVENGERS broke box office history, making $207.4 million during its 3-day opening weekend in the United States.  My family didn't see the movie, but it seems to be very popular.
Below are a few tips from Ms. Ricky Eisen, Founder and President of Events and Celebrations by Between the Bread, on…
“How to Throw a Superhero Party Worthy of ‘The Avengers’’” 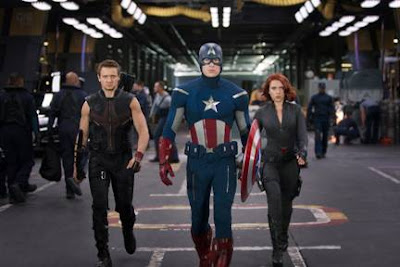 Invitations: Start your party off right with the perfect invitation. You can make your own postcard invitations with cardboard cut-outs of bright blue painted stars, and include the details about your party in a thin black marker. Decorate the front of each with classic comic book words like POW!, ZAP! And WAM!

Décor: The Avengers bring together 6 epic superheroes. Create your own easy decorations with cardboard cutouts of spiders and paint them black, neon green head’s of The Hulk and classic American flags for Captain America and, throughout the party, use bold colored streamers, which will add some mystery to the room.

Centerpieces: Choose your favorite Avenger and decorate the table around that character. Use lots of primary colors, since comic strips are usually blue, yellow and red. Print outs of comic book pages covered in contact paper make great placemats. Blanket your tables with these to tie the décor together and include stars, spiders and Hawkeye cut-outs on wooden sticks around the table with silver confetti.

Music: Keep the music simple but fun. “Live to Rise,” the original song written for and appearing in the film is the first single from the Marvel Music/Hollywood Records release Avengers Assemble. The epic and cinematic video, featuring a searing live performance with film footage, was directed by Robert Hales (Red Hot Chili Peppers, Janet Jackson, Kings of Leon, Justin Timberlake). View “Live To Rise”!

Party Favors: As a parting gift, place a few Avenger designed cookies in a cellophane bag and close with a gold twist-tie – your guests can enjoy the party for days to follow with these treats!”

MARVEL’S THE AVENGERS is now playing in theaters everywhere!

Be sure to stop by and enter my Marvel's the Avengers Prize Pack Giveaway!
Posted by CheekyMommaof2 at 7:18 AM