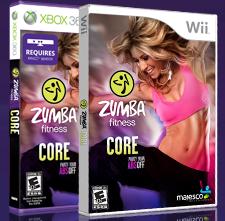 EDISON, N.J., September 19th, 2012 –Majesco Entertainment Company (NASDAQ: COOL), an innovative provider of video games for the mass market, announced today Zumba® Fitness Core, the first and only video game designed to sculpt your abs within an exhilarating dance-fitness, total body workout, launches October 16, 2012 in North America for $39.99 on both the Wii™ system from Nintendo and on Kinect™ for Xbox 360®.

Take a look at the newest addition to the hit video game franchise that has sold more than eight million copies worldwide with the latest batch of Zumba® Fitness Core screenshots. Check out in-game venues, superstar Zumba® instructors and exclusive gameplay.

Zumba® Fitness Core features 40 new songs and routines, 33 international dance styles from around the world and hot new choreography designed to sculpt stronger abs through a total body workout. PARTY YOUR ABS OFF™ as celebrity Zumba instructors guide you through routines set to a range of current chart-topping hits, era classics, exclusive re-records and genre-blending fusion tracks that together with new Zumba® original songs, deliver the most diverse range of dance styles of any Zumba® Fitness game to date.

Choose from 45 different pre-set classes or customize your workout to suit your preference. New fitness features include nutrition and lifestyle tips plus personal goals you can work toward to keep motivated. Skip the crunches and dance your way to tight, toned abs with this engaging new interactive fitness experience!

Zumba® Fitness Core will launch October 16, 2012 for the Wii™ system from Nintendo and Kinect™ for Xbox 360®. A playable Kinect for Xbox 360 demo is also now available on Xbox LIVE® Marketplace for the Xbox 360® video game and entertainment system from Microsoft. Pre-order the game and find out more at www.ZumbaFitnessGame.com.

Zumba Fitness is a global lifestyle brand that fuses fitness, entertainment and culture into an exhilarating dance-party workout. Coined “fitness-parties,” Zumba classes blend upbeat world rhythms with easy-to-follow choreography, which provide effective, total-body workouts. Founded in 2001, the company is now the largest branded fitness program in the world -- reporting more than 14 million weekly class participants, in over 140,000 locations, across more than 150 countries.

For more information about Zumba Fitness programs and products, or to find a live class, visit zumba.com.

Majesco Entertainment Company is a leading developer and publisher of video games for the mass market. Building on more than 20 years of operating history, the company is focused on developing and publishing a wide range of casual and family oriented video games on all leading console and handheld platforms as well as online, social networks and mobile devices. Product highlights include Zumba® Fitness, Cooking Mama™ and NBA Baller Beats™. The company's shares are traded on the Nasdaq Stock Market under the symbol: COOL. Majesco is headquartered in Edison, NJ with offices in San Francisco, CA, Brockhamptom, UK, and a social games development studio in Foxboro, MA. More info can be found online at majescoent.com.

Nintendo trademarks and copyrights are properties of Nintendo.  Kinect, Xbox, Xbox 360, and Xbox LIVE are either registered trademarks or trademarks of the Microsoft group of companies.

**All information provided through PR company.  Wach for my Zumba Fitness Core review sometime next month!
Posted by CheekyMommaof2 at 3:42 PM