I was sent a 3 packs of Zits Ewww! and was compensated for this blog post. All opinions are my own.

I will never understand some of the things that people enjoy.  Let's talk about toys... toys that kids seem to go crazy over, yet leave adults shaking their heads and wondering WHY?

When I was younger it was whoopie cushions and fake vomit.  A couple of years ago, the poop emoji became popular.  Now... it's ZITS! That's right... Zits!  I remember a day when a zit was the "end of the world" for kids, especially teenagers!  How many times did we beg our parents to let us stay home from school because of a massive zit on our nose or forehead?  Now kids are begging their parents for Zits (Ewww!). 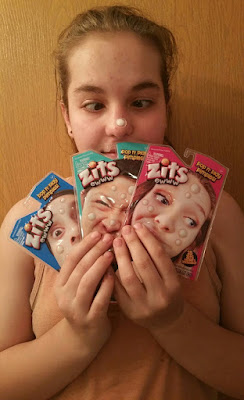 Introducing Zits (EWWW!) pop n’ play pimples. Just press them on, squeeze ‘em, and gross out everyone!  Zits pop n' play pimples are safe and non-toxic, which as a parent I can say is one positive aspect of this "gross" new fad.


"Every generation has its own spin on gross toys. We wanted to go where no toy has gone before and still be fun! So, ‘we got Zits!’”

"In searching for the next big thing, NSI turned to a massive cultural trend – a social media fascination with pimple popping. Hundreds of millions of viewers around the world are tuning into platforms like YouTube, Facebook and Reddit to watch people pop zits. There are even celebrity zit poppers. One dermatologist, dubbed “Dr. Pimple Popper,” has 3.2 million YouTube subscribers and almost 1,000 videos, with a staggering 2 billion views."


REALLY?  Today's society is watching people pop zits for fun and entertainment?  WHY?  As odd as it is, I know that people are intrigued, fascinated, and entertained by weird, gross, and unusual things.  But never would I have thought that zits would become as popular as they are right now.  I will admit that I am totally grossed out at just the thought of this new trend.

Basically, these zits are various sized stickers that you stick on your face, and pop them like a big white zit.  Then the white goo squeezes out!  Gross, right?!

If your children (or even you) are interested in finding out what all the hype is about... check out the giveaway below and be sure to enter!

Zits Ewww come in packages of 25 zits in different sizes, with a MSRP of $4.99, and can be found at Walmart and other retailers.