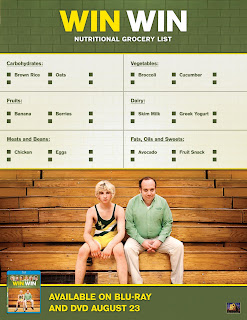 The ‘Win Win’ Grocery List has a variety of nutritional options that you can easily print and use in your next grocery store run. It’s a fun checklist that can be filled in but also gives some nutritional suggestions for each section of the food pyramid.
In the movie, Jackie Flaherty (Amy Ryan) takes Kyle (Alex Shaffer) to the grocery store so he can pick up some items for his grandpa. This outing also bonded the two a little closer as Kyle had never had a real mother figure in his life until then. 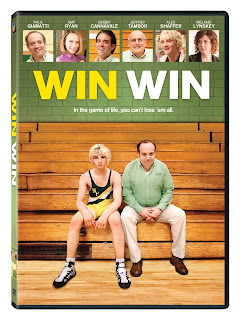 Laugh, cry and win when WIN WIN comes to Blu-ray and DVD on August 23, 2011 from Twentieth Century Fox. WIN WIN is not just another sports movie; the unconventionally uplifting film combines action on the mat with the hilarious highs and heartbreaking lows of a new kind of family. Indie film writer-director Tom McCarthy (The Visitor) guides a celebrated cast including Academy Award® nominees Paul Giamatti (Sideways, “John Adams”), Amy Ryan (Gone Baby Gone) and high school wrestling star and newcomer Alex Shaffer in this quirky coming-of-age tale.
There Are No Losers as Two Down and Out Guys Wrestle Their Way to Happiness in WIN WIN Coming to Blu-ray & DVD August 23
Posted by CheekyMommaof2 at 7:14 AM