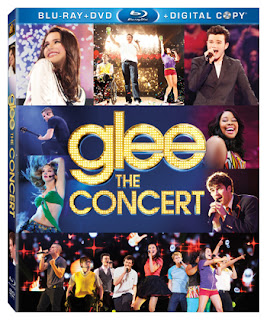 Enjoy the breath-taking concert experience like never before with new exciting never-before-seen and extended performances, clips of fans’ favorite characters, exclusive extras and more, all from the comfort of your living room.

The company also releases all products globally for MGM Home Entertainment. Each year TCFHE introduces hundreds of new and newly enhanced products, which it services to retail outlets from mass merchants and warehouse clubs to specialty stores and e-commerce throughout the world.

Posted by CheekyMommaof2 at 7:46 PM

My girls love Glee! I would love to win this for them

I want to win for myself, I like glee lol

My entire family loves Glee, and we would enjoy watching this together.

My son loves dancing to the songs!!

I'd like to win this because I love Glee! I wish I could have gone to one of their concerts. (You'd think they'd have one in Central Ohio, since it's based in Ohio!)

We'd love to win because we love Glee!

I love Glee :) I sang in High school and college... although I've never been slushied

I am a huge Gleek!! Can't get enough of this show. I love the music, most of it is from my childhood, and its nostalgic listening to the songs. The characters all have something each of us can relate too. Sure the storylines can be cheesy and unrealistic, but its just plain fun!

I would love to win because I just started watching Glee on Netflix and I'm in love with this show, and Will!
hendymartin1 at yahoo dot com

I want to win because I was supposed to go to the Glee concert with my husband and that was the day my water broke and my son was born. I love Glee. I've never missed an episode and I'm a huge fan of the writer of the show Ryan Murphy.

I entered the What's Your Number DVD Giveaway

I placed your button on my blog (right hand side)

I blogged about this giveaway on my blog.

I could sit and listen to their music all day. I love their show too. I would love to have a movie of theirs to watch whenever I want. dwelchert@yahoo.com

I entered your What's Your Number DVD Giveaway. dwelchert@yahoo.com

I have your blog button on
http://fortheloveofcouponsanddeals.blogspot.com/p/blog-roll-blogs-i.html

I've never seen it before..

I entered the chick fil a giveaway.

I would like to win because I enjoy Glee.

I entered the Kernel Seasonings giveaway

I would love to give this to a friend who is a huge fan!

I want to win because my whole family likes Glee and we want to see this.

I put your button on my blog
http://couponboss.wordpress.com/giveaway-blogs/