See ‘African Cats,’ Save the Savanna 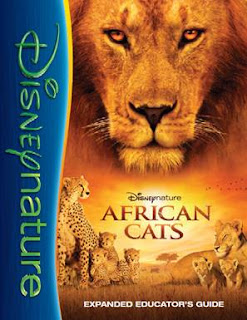 I'm really looking forward to watching African Cats with my kids.  Our entire family enjoys movies like this.  By watching the trailer, I'm sure it's going to be a great movie.  On addition, African Cats is going to be making a difference!

Leaping into theaters on Earth Day, 2011, “African Cats” features the real-life love, humor and determination of the kings of the African savanna: Mara, an endearing lion cub who strives to grow up with her mother’s strength, spirit and wisdom; Sita, a fearless cheetah and single mother of five mischievous newborns; and Fang, a proud leader of the pride who must defend his family.

“See ‘African Cats,’ Save the Savanna”
During the film’s opening week (April 22-28), a portion of the proceeds from that week’s ticket sales will be donated to the African Wildlife Foundation through the Disney Worldwide Conservation Fund to protect the Amboseli Wildlife Corridor, a passage between the Amboseli, Tsavo West and Chyulu Hills National Parks that is frequently used by lions, cheetahs, elephants, zebras, giraffes and a host of other animals in the African savanna.

Pledge to see “African Cats” on Eventful:
Fans pledge to see “African Cats” opening week by logging onto http://eventful.com/africancats. Participants can watch how honoring that pledge can effectively save the savanna.  A real-time counter will show how many people have participated, and there will also be a graphical map representing the number of acres across the savanna that are being conserved based upon the number of pledges received. Upon arriving at the theater, fans can check in via their mobile device to win special prizes.


**By sharing this information I will be entered to win a pair of AFRICAN CATS books.
Posted by CheekyMommaof2 at 7:38 AM