There was a Field Day during the last week of school, the theme was Pirates! The kids were going to be doing 10 different Pirate themed activities. Of course, coming dressed as a pirate was welcomed and encouraged!
I didn't want to spend the money on a traditional pirate costume, so I used my creativity and came up with a very frugal pirate costume!

I found a long sleeve button up shirt at Target on clearance that actually had skulls and swords on it that was absolutely perfect! It was 75% off and I got it for $2.49!
I bought an eye patch that came with an earring for $1.25.
I also got a hat for $2.50 and a hook for $1.
He already had a pair of pants with holes in both knees - Free!
I cut the bottom of the shirt off as well as the sleeves, making it actually fit him as it was a size 16. I cut jagged edges along the bottom. I also cut the jeans off right above the knee and did jagged edges on those as well!
Total price of the outfit and accessories: $7.24
His Pirate Cuteness: Priceless! 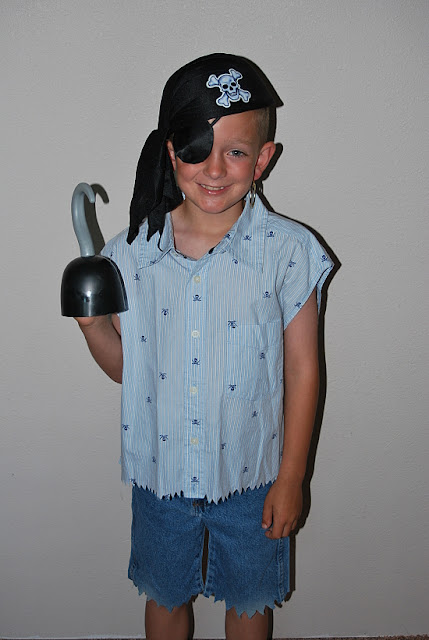 AHOY MATEY!!
Posted by CheekyMommaof2 at 9:49 AM

What a great pirate costume!