Alvin and the Chipmunks: Chipwrecked (Review)

We had a movie day over the weekend and one of the movies we watched was Alvin and the Chipmunks: Chipwrecked!  I have always loved the Chipmunks, and have fond memories of them.

My eleven year old son was joking around and said, "Wow, the Chipmunks sure do sing a lot of popular songs!"  My eight year old daughter's immediate response was, "Of course they do!  They are famous singers, don't you know!" 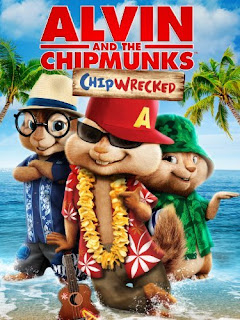 Alvin and the Chipmunks: Chipwrecked was fun and cute!  I loved the tropical island setting and the music was so fun!  For me, the music was the best part, I loved it!  I think the Chipmunks sing some of them better than the original artists!

The movie relayed a very important message: You can have fun, but it is important to know when to be silly and when to be serious!  Of course, there are consequences for every action you make, even if it is all in good fun.

It was fun to see Simon acting a silly and Alvin stepping up to the plate!

Since watching the movie, my daughter has asked to watch it every day since.  I think Alvin and the Chipmunks: Chipwrecked may be her new favorite movie, although that could change at any moment. 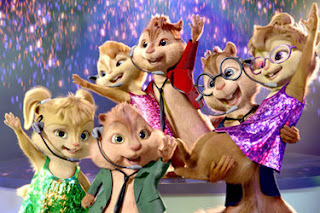 The Chipmunks, Chipettes and their caretaker Dave Sevelle (Jason Lee; “My Name is Earl”) embark on a trip of a lifetime aboard the Carnival Dream cruise ship. Seeking fun and excitement, the Chipmunks turn the luxury cruise liner into their own personal playground. But the ultimate vacation quickly becomes a disaster when the Chipmunks, Dave and Carnival cruise pelican mascot, who turns out to be the chipmunks’ old manager, Ian Hawke (David Cross; Megamind), accidentally fall overboard and find themselves ‘Chipwrecked’ on a remote island. Stuck in an unfamiliar territory, the six furry castaways are separated from Dave and must figure out a way to survive on their own for the first time in their lives.

Showcasing a variety of popular songs from Lady Gaga’s “Bad Romance” to LMFAO’s “Party Rock Anthem,” fans can get munked with the Munk Music & Dance Machine special feature on the ALVIN AND THE CHIPMUNKS: CHIPWRECKED Blu-ray and DVD. Additional special features on the Blu-ray and DVD include sing-a-long music videos, behind-the-scenes featurettes, extended scenes, and more. Fans can also enjoy an exciting Chipwrecked: Coloring with The Chipmunks App, featured exclusively on the Blu-ray Disc. The film will be available on Blu-ray and DVD for the suggested retail price of $39.99 and $29.98 respectively, and the two-disc Island Adventure edition will be available for $34.98.

Posted by CheekyMommaof2 at 9:41 AM