My eight year old daughter has been a Gogo's Crazy Bones fan for over a year now!  Gogo's are cute, colorful little creatures that are fun to play with and highly addictive!  She has a collection of them in her room, and has given each one of them a name of their very own.  She absolutely loves them and plays with them all the time.

You can only imagine her excitement when I gave her the new Gogo's Crazy Bones game for her Nintendo DS!  She squealed with excitement and couldn't get the game opened fast enough.

Her favorite game is the Battle and Basket Attacks, where she gets to launch the Gogo's Crazy Bones through the air and try to land them into the baskets.  Much like being shot out of a cannon!

This game is perfect for children and will provide hours of excitement!  It is fun, interactive and challenging. 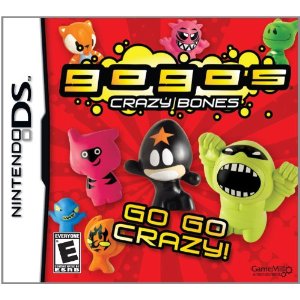 Unlock five Gogo’s in every level as you take on popular Gogo’s games like Knock Out, Battle and Basket Attacks. Earn stars and unlock rewards as you explore interactive environments from the bus stop to the playground. Gogo’s Crazy Bones the game provides hours of fun and entertainment as you collect, trade and play with friends!

Posted by CheekyMommaof2 at 9:50 AM