If you were to ask my two children on any given night what they would like for dessert they would both say popcorn!  I love popcorn because it's quick and easy, low in calories and it tastes great!  We can also easily spice things up by sprinkling some popcorn seasoning into our bowl! I would much rather my children eat popcorn for dessert or snack than sweets like cake and cookies.

We love popcorn for snack, dessert and of course when we watch movies!  A movie just isn't complete without a big bowl of popcorn!  Did you know that Americans consumed over 16 billion quarts of popcorn last year? 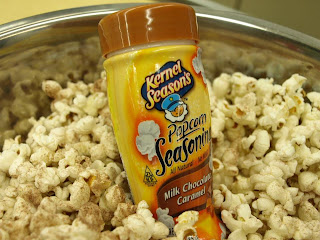 We recently had the pleasure of trying a variety of Kernel Season's Popcorn Seasonings.  Our favorite?  We can't agree on just one, we loved them all in their own unique and tasty way.  We tried them on popcorn and ice cream and it was delicious both ways.

Over the weekend I had a cup of coffee with creamer and whip cream... I sprinkled some of the Milk Chocolate Caramel Kernel Season's Popcorn Seasonings on top --- pure heaven!

Kernel Season's Popcorn Seasoning can be found at many movie theaters (I've seen them at Regal Cinemas) and stores nationwide.  They are kosher, gluten-free, all natural and contain no msg.   It's not just for popcorn... they can be sprinkled on popcorn, veggies, rice, eggs, noodles, potatoes, coffee and anything else you like!

You can satisfy any craving with one of Kernel Season's Popcorn Seasoning 18 delicious different flavors including: 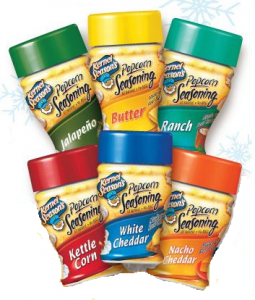 A few "corny" facts about popcorn:

*Popcorn has 24 calories per cup
*Popcorn can pop as high as three (3) feet
*500,000 TONS of popcorn are produced each year in the U.S.*Popcorn became popular during the Depression because it was so affordable

Posted by CheekyMommaof2 at 7:27 PM

White cheddar would be gone in no time in my home.

Milk Chocolate Caramel to turn a treat into desert !

I thought if I said it three times it would appear!

I'd love to try the Milk Chocolate Caramel

I would love to try the Sour Cream and Onion. dwelchert@yahoo.com

I would love to try the Ranch.
strawberry_sweetheart39@yahoo.com

your button is on my blog
http://wildnmild.blogspot.com/

I would love to try the white cheddar, BBQ, Butter, Ranch, Caramel, Parmesan & Garlic or the Chocolate Marshmallow!!!! They all sound good! Thanks for the chance to win this!

I'd love to try Parmesan and Garlic, YUMMM!!

Your button is on my blog:
www.hirschhousehold6.blogspot.com
steph4575 at msn dot com

I would most like to try the Parmesan and Garlic!

am already an e-mail subscriber (kitty32504 at cox dot net)!

I have your button on my blog
http://couponboss.wordpress.com/giveaway-blogs/

I would like the Cajun! Thanks for the fun giveaway!

I gotta try the chocolate marshmallow!

I'd love to try White Cheddar ヅ *Thanks* for the giveaway!

✽ Blogged about the giveaway

You didn't leave extra info boxes on the Rafflecopter form. [You need to check mark "I need extra info to verify this entry" and "Tell your entrants what info you need."]

I would like to try caramel
jenhedger at hotmail dot com

I would like to try the Salt and Vinegar

I'd like to try the Salt and Vinegar and the Kettle Corn flavors!

Their Caramel Flavored Seasoning sounds like a wonderful choice!

The Ranch and the Parmesan & Garlic tied for first place with me!