The Longest-Running Broadway Musical of All Time Celebrates 25 years of Romance with a Spectacular Live Production on One of the World’s Most Legendary Stages
THE PHANTOM OF THE OPERA
AT THE ROYAL ALBERT HALL
February 7, 2012 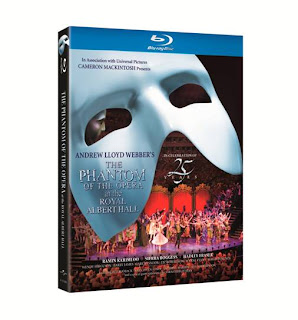 Broadway’s longest-running production of all time celebrates a triumphant quarter century on stage with The Phantom of the Opera at the Royal Albert Hall, coming to Blu-ray – with perfect hi-def picture and perfect hi-def sound – DVD, On Demand and Digital Download on February 7, 2012 from Universal Studios Home Entertainment. On October 2, 2011, composer Andrew Lloyd Webber and producer Cameron Mackintosh marked the 25th anniversary of their beloved musical extravaganza, “The Phantom of the Opera,” with a lavishly staged production at London’s legendary Royal Albert Hall that was beamed live via satellite to cinemas across the globe.

The Phantom of the Opera at the Royal Albert Hall marks the first time a live performance of the blockbuster musical has been made available for home viewing, making it a must-have anniversary release for fans everywhere.

The show also features Barry James, Gareth Snook, Liz Robertson and Wynne Evans, as well as special guest appearances from the actors who originated the roles of The Phantom and Christine, Tony® Award winner Michael Crawford and Sarah Brightman, in a memorable final curtain call.

“Phantom” aficionados will also be thrilled to know that “Love Never Dies,” Andrew Lloyd Webber’s spectacular follow-up musical will also arrive on Blu-ray and DVD for the first time on May 29. With lush visuals and a mesmerizing score that rivals the original in power and beauty, this live production of “Love Never Dies” finds Christine and the Phantom reunited in turn-of-the-century New York City after a decade apart.

Take This Once-in-a-Lifetime Experience Home and Win a DVD!
In order to win your very own copy of The Phantom of the Opera at the Royal Albert Hall on DVD, simply answer the following question:

Which city does “The Phantom of the Opera” NOT currently have a live production in?

Posted by CheekyMommaof2 at 9:14 AM

I don't think I answered the question before I "entered" - my answer is Los Angeles :)

It is not in Los Angeles.

Los Angeles. Thank you for the chance to win this awesome giveaway!

Well, I have to say Los Angeles

It's not playing in Los Angeles.

It is currently not playing in Los Angeles. :)

Los Angeles doesn't have POTO.
I had to really read to find it, LOL, didn't want to cheat!
Dede